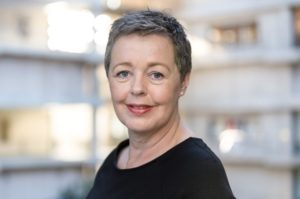 Professor Ellen T.M. Laan died on January 22, 2022, in the presence of her loved ones, after a long confrontation with cancer.

Ellen was a registered Healthcare Psychologist, licensed sexologist, and head of the Department of Sexology and Psychosomatic Gynecology at the Amsterdam University Medical  Center.

Ellen was born on April 3, 1962, in Abbekerk a small rural village, and attended high school at Schagen. After a short period studying Dutch language and literature, she moved to Psychology where she graduated cum laude in 1988 from the University of Amsterdam, after which she began her doctoral studies at the department of Professor Walter Everaerd. In 1994 she obtained her PhD degree cum laude with research on female sexuality. Her thesis was titled “Determinants of sexual arousal in women: Genital and subjective components of sexual response”. Her research into the psychophysiological measurement of vaginal reaction to sexual stimuli with plethysmography was ground-breaking. The results clarified that physiological (objective) arousal and subjective arousal do not always go together (disconcordance) and that women, with the right sexual stimulation and context, are fully able to respond with increased blood flow and lubrication. This knowledge opened the door to many scientific presentations, research activities, and media attention. In addition, she conducted scientific research on many other topics, including the influence of hormones on sexuality, ‘pelvic floor and sexuality’ and ‘sexual functioning in cancer patients’ with more than 150 peer-reviewed publications and more than 50 book chapters.
In 2009 she became a Principal Investigator of the Department of Psychosomatic Obstetrics and Gynecology, Academic Medical Center (AMC), University of Amsterdam.

Except for her ongoing research and accompaniment of PhD research, she was always critical of the quality of research and published studies and frequently wrote comments on publications. With other leading female sexology researchers, she fought at the FDA for equality of “sexual medication” for women and men, but she also vehemently resisted the marketing of unsound medication that was claimed to increase women’s sex drive. This activist side continued to develop and she increasingly pasteurized her advocacy of female sexual pleasure and sexual equality between women and men. She became more and more visible in the various public media and on social media. Many interviews can be found in newspapers, magazines, and podcasts. Until the very end, she continued to spread her messages.

Education was also very important to her. In Ellen’s opinion, all health care professionals need to have basic knowledge of sexology and have broader and open attitudes toward sexuality. She contributed much to the knowledge of both students and experienced professionals. Gradually the general public got ample opportunities to learn from Ellen’s enthusiasm and knowledge on sexuality and sexual pleasure. With Rik van Lunsen she published in Dutch the popular book ‘Sex; life-long learning!’ to provide evidence-based information in understandable language on sex and sexuality. A new book of both of them is intended to follow soon. One of the highlights of public awareness was her performance during the ‘Lowlands’ rock festival where her nickname ‘The Godmother of Dutch sexology’ was settled.

In her advocacy role, Ellen was a mother for thousands of girls and young women, telling them not to accept dyspareunia and to claim pleasure and proper lubrication. In that role she could be very warm,  but also very straightforward, using winged statements like ‘Only men have vaginal orgasms!’.

Ellen was not only involved with awareness and sexual wellbeing but also strongly committed to her patients who often faced complex problems. Under the leadership of Rik van Lunsen, the previous head of the AMC department where she started her clinical career, she integrated the bio-psycho-social approach. It was clear that she had a big heart for the patients who often had nowhere else to turn. For this reason, she continued to provide patient care for as long as possible.

With all her knowledge, research, efforts, and activism she was nominated in 2016 as Professor of Biopsychosocial Determinants of Sexual Health at the Department of Psychosomatic Obstetrics and Gynecology, Amsterdam University Medical Centers, University of Amsterdam. In 2018 she established “Sexual Wellness Netherlands”. A foundation aiming to disseminate evidence-based knowledge to professionals and the public.

During her career, Ellen received various awards and recognitions, too many to mention them all. She was an honorary member of the Dutch NVVS and holds an honorary doctorate from the Catholic University Leuven in Belgium. In her last months, Ellen was rewarded with the ESSM Lifetime Achievement Award and she received  Royal Honor, being knighted in the Order of the Dutch Lion. Even in her terminal state, she was able to intensely enjoy these recognitions and achievements.

Ellen was important for scientific development in sexology and the promotion of sexual well-being in the Netherlands and abroad. With her work and unrelenting enthusiasm for the profession, she entered the broad field of sexology by combining high-quality scientific research with education and patient care. She was an example of truly translational sexology, something that not many colleagues succeed to pursue.

She was a special and courageous person, who accepted life and her illness as it was. A bald head from chemotherapy didn’t stop her from an extensive TV interview without a wig and when she knew she was going to die, her reaction was: “That’s just how it is. I’ve had a wonderful life!”.

In addition to all of this, Ellen was a warm and committed person. Even criticism she was giving first to herself and then to others. One of her citations was “Feedback is the best gift you can give someone!”. She worked hard but still could be deeply involved with her family and her loved ones, especially Mario her partner, and her daughters Leah and Britt. She was very committed and continued giving personal attention to her colleagues and PhD-students. Until the end, she remained interested in their situations and tried to support and encourage them.

With intense grief and sadness, we say farewell to our respectful colleague,  admirable person, and friend. Ellen was an inspiration to many of us. We wish her husband Mario, her daughters, her family, her colleagues, and her friends a lot of strength with this great loss.

We all will miss her.

Our Vision
"Sexual Health for Everyone"

Who we are Members of the Board YoSeMA Membership